Yesterday, my mailbox was full of campaign pamphlets.  Granted, I had been away from home for a few days.  I was down in Palo Alto caring for my nieces while my brother and sister-in-law were out of town.  But still.  I just left Friday.  I returned Monday.  We all know that mail doesn’t come on Sunday.  And there were 18 separate pieces of campaign mail in my box last night.  Election Day is a week from today and, honestly, I can’t wait for it to be over.

Please don’t get me wrong.  I am not a voting hater.  I vote for everything.  I don’t just vote for big elections like the one next week.  I vote for every city, county, state…whatever…if it is an Election Day, you will see me walking down 51st Street to the firehouse that is my local polling place and casting my ballot.  I get my “I Voted” sticker, and proudly go on about my day.  Maybe I am honoring my maternal grandparents who understood what it meant to not have the right to vote.  They were both poll volunteers their entire adult lives.  Maybe, I know they are watching and I don’t want to disappoint them.

But, I understand that the whole thing is overwhelming, even frustrating.  Especially in big elections like this.  Here in Oakland, CA, our ballot is huge.  In addition to casting our vote for the POTUS, we are voting for local city council, school board, a variety of local measures, 8 million state initiatives that people are very passionate about.  And I have noticed that many of us, especially those of us who need the most protection from our government – women, folks of color, the poor, LGBT folks, young people etc. – are so consumed with our day-to-day survival that feel like we just don’t have time to research all of the issues, form our opinions, and get activated as citizens.

Recently, I met a woman – a grown, professional woman of color – who said that she didn’t vote because she felt that “those people” don’t represent her.  I didn’t know what to say in that moment.  So, I didn’t say anything…which bums me out.  I wish I had the courage to connect with her – woman of color to woman of color.  I wish I had said, “Your attitude is part of the whole problem.  The reason that so many politicians can say one thing and turn around and do another is because we, the people, don’t hold them accountable.  We are too  focused on our own lives.  We don’t pay attention to the bigger picture.  Maybe, if more people with your attitude voted, we would actually have more of ‘those people’ actually listening to us and acting in our interests.”

But, I didn’t say that.  And next week, another opportunity for her voice to be heard will again just pass right on by. 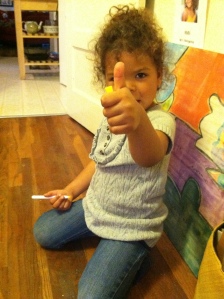 A week from today is not just Election Day.  It is also my niece Lilian’s 5th birthday.  This weekend, when I was hanging out with her listening to how she would much rather be Woody than Buzz Lightyear at her Toy Story themed birthday party (smart choice), I told her, “Guess what Lil, on your birthday, we get to vote to decide who our next president is!”  Her face lit up.  And, in that moment, I had hope that this girl is going to grow up to be a woman of color who will be able to look beyond her own immediate needs, get active in her community, and take responsibility for shaping the world that she wants to live in.  She will be that woman who, although it is sometimes frustrating and overwhelming, will actually leaf through all those pamphlets, talk to folks, read some stuff, and form opinions that she is not afraid to share.

Come on.  We can do it.  There is only 1 week left.  We can get through this together.  It’s annoying sometimes, but it’s worth it.  Let’s do the work.  Let’s do it for Lilian.

Here are 5 things that help me decide how I am going to vote: